Diabetes mellitus is a group of diseases of the endocrine system associated with a violation of the absorption of glucose, developing due to a lack or absence of insulin (hormone) in the body, resulting in a significant increase in the level of glucose (sugar) in the blood (hyperglycemia). It is manifested by a feeling of thirst, an increase in the amount of urine excreted, increased appetite, weakness, dizziness, slow healing of wounds, etc. The disease is chronic, often with a progressive course.

Compensated diabetes mellitus in itself does not pose a threat to human life. Its complications and their consequences are dangerous. It is impossible not to mention some of them, which are either often encountered or pose an immediate danger to the life of the patient. Heart disease and stroke are much more common in people with diabetes than in people without it. Most of the cardiovascular complications of diabetes are caused by blockage of blood vessels or slowing of blood flow through them. Eating foods high in saturated fat, trans fat, or cholesterol can lead to excess lipids (such as cholesterol and triglycerides) in the blood. This condition can cause blood vessels to narrow or become blocked. A high level of glucose in the blood in the presence of diabetes also contributes to the clogging of blood vessels. If the blood supply to the heart is disrupted, a heart attack can occur. Blockage of blood vessels or slowing of blood flow in the brain can lead to the development of a stroke.

Your doctor will measure your blood pressure and determine the level of lipids in your blood. If there are deviations from the norm, diet therapy, lifestyle changes and, if necessary, the use of medicines can help overcome them.

Late complications of diabetes include damage to many organs and systems of the body. First of all, small vessels (capillaries) and nerves are affected. The walls of blood vessels lose their elasticity, the vessels become brittle, so they are easily injured. In this case, local small hemorrhages occur. In those places where such microtraumas occur, connective tissue grows. Due to this connective tissue, the walls of the vessel thicken, and the permeability for nutrients decreases. Considering that vessels and nerves are present in any organ, the whole organism suffers with diabetes. But first of all, the eyes, kidneys and lower limbs are affected.

Eye damage in diabetes is called angioretinopathy. The presence or absence of angioretinopathy, as well as its stage, can be determined by an oculist during an examination of the fundus. At the same time, he notes the presence or absence of hemorrhages, newly formed retinal vessels and other changes. To prevent or stop changes in the fundus, compensation of diabetes mellitus is necessary.

For the treatment of angioretinopathy, drugs are used, as well as the surgical method of laser photocoagulation. Every patient with diabetes mellitus should be examined by an ophthalmologist twice a year in a planned manner. In case of any visual impairment, you should consult an ophthalmologist outside the plan. 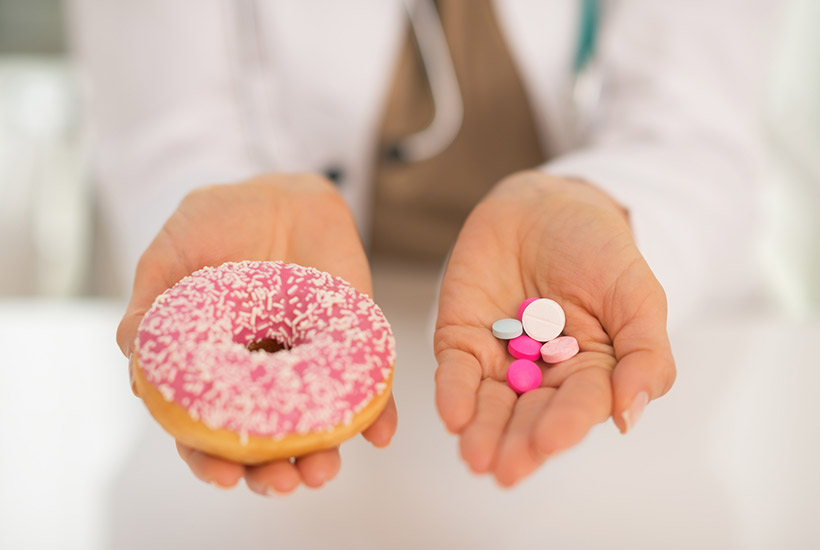 It should be noted that with diabetes, the sensitivity of the skin to various external influences decreases. As a result, cuts, microtraumas go unnoticed. In the future, these wounds can become infected and lead to long-term non-healing ulcers and even gangrene.

This is a rather serious complication. It includes five stages. The first three are reversible, they can be detected by examining urine for microalbumin (a protein of small mass). The appearance of a protein in the general analysis of urine already indicates the presence of the fourth stage, which, unfortunately, is irreversible. In the future, chronic renal failure develops, which is manifested by a decrease in the excretory function of the kidneys, edema, an increase in blood pressure and an increase in the level of creatinine and urea in the blood.

In order to prevent the development of diabetic nephropathy or to stop the further development of an existing complication, it is necessary to maintain blood glucose numbers at a level as close to normal as possible. In addition, every patient with diabetes | | diabetics should at least four times a year take a urine test to determine the protein in it – albumin.

It should also be noted that atherosclerosis develops very quickly in diabetes mellitus. Therefore, the incidence of myocardial infarction is very high. Given the damage to the nerve endings in diabetes mellitus, very often heart attacks occur without severe pain. Therefore, with any discomfort in the heart area, you should consult a doctor and do an ECG. In addition, you need to regularly monitor blood pressure.